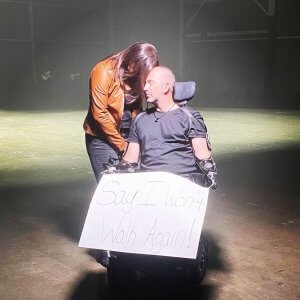 After a sudden illness and 107 days in the hospital, Gary Miracle came home to a radically different life.  He had lost all four limbs.  Gary and Kelly held on to the belief that God would not allow something so big and drastic in his life, if He didn’t plan to use it in a big way.  Gary’s story became the inspiration for MercyMe’s song and video, “Say I Won’t.”